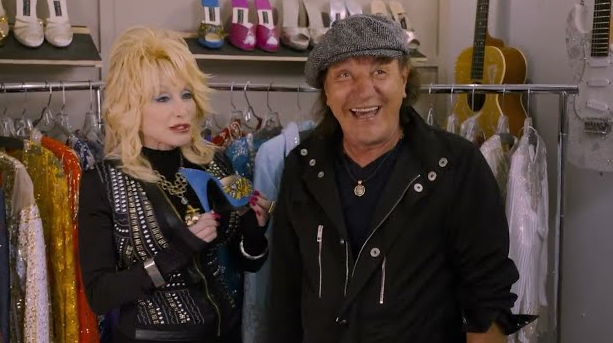 In the opening episode of season two of Brian Johnson’s A Life On The Road, the rock legend surprised country singer an icon Dolly Parton as he visited her in her dressing room. They have such a lovely friendship and you can easily tell from the video how comfortable they are with each other. It’s a super chill and relaxed interview as Parton showed off her glittering dresses.

She called her outfits “highway to heaven” in reference to AC/DC’s classic hit, “Highway to Hell”. It was interesting because contrary to her colorful clothing, Johnson preferred black t-shirts during concerts.

They continued to chat about music and her fashion – two things which she’s well-known for.

Johnson told her how “honored” he was that he heard a song on Parton’s 2016 album, “Pure & Simple”. He told her, “I keep wondering where you pull all the lyrics from and the melodies.”

“I draw from life like you do,” she answered. “We live it, we write about it.”

Apparently, Parton had been writing since she was just seven years old! She had written hundreds of songs over the years and recorded dozens of them.

Watch the rest of the short interview below.