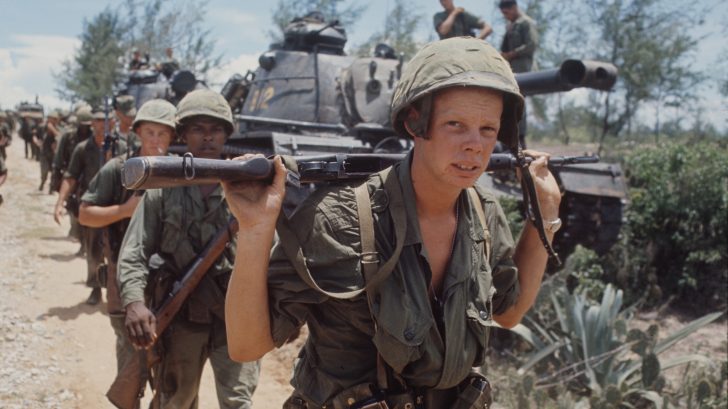 View of American soldiers of 7th Marine Regiment as they march along a dirt road, Cape Batangan, Vietnam, 1965. A pair of tanks drive beside them. (Photo by Paul Schutzer/The LIFE Picture Collection/Getty Images)

That riff. That beat. That voice. There’s just something about this song, just the sound, that reminds of you of riding in a Huey over the jungle, getting ready to enter the hot zone.

This song was released in 1969 at the peak of U.S. involvement in the war. It was an attempt for the artists to warn the U.S. public about the consequences of the war.

The song was originally made to protest against the war. But it has been used as a soundtrack to many war movies, ironically.

4. “For What It’s Worth”- Buffalo Springfield

This song was actually inspired by an event where young people rallied to protest against a new curfew and the closing of a popular club, Pandora’s Box.

5. “We Gotta Get Out Of This Place”- The Animals

Written by Barry Mann and Cynthia Weil, it was originally supposed to be for the Righteous Brothers, but The Animals ended up picking it up. It took on a meaning of its own, at the escalating Vietnam War.

6. “Paint It Black”- The Rolling Stones

Although war isn’t referred to in the song at all, but rather believed to be more about drugs. Nonetheless, many have referenced the Vietnam war because of the time it was released, and the first verse.

Another song that doesn’t necessarily have to do with Vietnam, it is one from a very popular artist at the time, Jimi Hendrix who released numerous songs during this time. It still isn’t clear what exactly this song is about.

One of CCR’s biggest hits, the song is actually about gun control as Fogerty clarifies. “The thing I wanted to talk about was gun control and the proliferation of guns. I think my first experience as a kid was hearing about the fellow that climbed up in the Texas tower and was able to kill several people on the campus.”

Pretty obvious that the song is about Vietnam, it goes more into depth about the challenges that many veterans faced coming home. Written by Dan Daley, who didn’t actually serve, it was a metaphor for traumatic experiences, most notably, war, that people faced even after the fact.