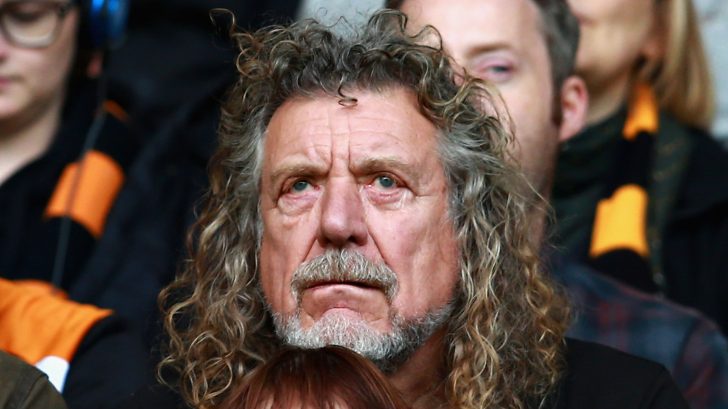 Led Zeppelin is widely regarded as the most influential, best selling, and iconic band in the history of rock and roll. They have influenced rock bands like Queen, Aerosmith, Rush, Ramones, and The Cult. Even singers such as Madonna and Lady Gaga acknowledges the band’s astounding impact in the music world.

Lead singer of rock band Led Zeppelin, Robert Plant in an interview with Classic Rock Magazine, gives insight on his career, new album, and Led Zeppelin. When asked if there were any chances of the band reuniting again, Plant responded:

“So stop living in the past. Open your ears and your eyes. It’s not that difficult, is it?”

Read the interview below:

On most of your albums, you often refer to places you’ve been to. Carry Fire seems to be about the period of time you spent living in Austin, Texas.

“Three years, yeah. Austin was just the door, the portal for finding that there’s so much more to…Austin. Everybody knows it’s a great democratic, liberal center of stuff, but take the roads west from there and you turn into Comanche country. And then you realize that there was a whole weave that’s been moved out of the way; a whole way of living, a whole understanding and a relationship with the earth that has been superseded.

And I found that by living there. I didn’t even know what I was going to find. I didn’t look for anything, but then I found this sort of remarkable lure towards the majesty of the Comanche nation.”

You still travel a lot. Is that in your blood, is that what makes you who you are?

“Yeah. Well, I’ve got acquaintances in the form of friends and I’m acquainted with beautiful places as well. The motion in me is to work, to sing, to write, to learn, and so I do return to certain places. And I feel the changes, and it’s a great liberation for me.”

“Are you referring to that ludicrous [Stairway To Heaven] trial? I won’t go into that [laughs]. Sorry, mate.”

But you split up with Patty?

“I did, yeah…And if you listen to the album you can hear me pouring out my heart to whoever’s interested. Cos that’s what I do. And it’s not easy to do that, believe me.

Okay, so let’s say instead that you left Austin because you missed the misty mountains.

That’s better! And I did. That’s what brought me back, really. The family and humor.”

You’re so passionate about history, and yet not a bit nostalgic about the music that you’ve created in the past. Why is that?

“Cos I prefer to move forward. It’s as simple as that. I don’t want to be stuck in the past — like so many of my contemporaries.”

There are a few people at sixty-nine who still write new material and go on tour. What makes you get out of bed and do that?

“Well, my eyes are open. It’s almost like sometimes I feel like I’ve just been born. When an animal is born, the mother licks the eyes of the baby — with cattle and sheep and stuff — and the eyes open and the focus comes in. Sometimes it feels like that. I’d go to places and I read it differently, and relationships and friendships… The ebb and flow of life is spectacular. I wouldn’t like to be stuck in one place for too long, otherwise, I might lose this trick I have.”

What is this trick?

The song Heave Sent on Carry Fire is like the anthem of your being, isn’t it?

“Yeah, exactly. Spot on. Are you a restless, journeying spirit? Well, I don’t think restless, but I am journeying, yeah. I mean, I’ve got the key.”

“[Laughs] Where the fuck does this memoir shit come from?”

Because it seems everybody’s doing it.

“Yeah, I know. I just think the whole idea of us… Once upon a time, we were social deviants, pushed out of the corners of society, quite often body searched in the street by cops.

I remember walking through Dearborn [part of the Detroit metropolitan area] with John Bonham in 1969, on a Sunday afternoon, when Detroit was in flames, and looking across the cityscape and seeing smoke and things like that, and some people went by in a big Lincoln Continental and they put the window down slowly and spat at us — because we were hippies.

We were representing a challenge to the order. So do we want to chum up and cuddle up to the whole idea of going to a publisher and telling stories? I mean, what — who — for? Those stories are locked nicely between my two ever-growing ear holes. So fuck it. There’s a lot in there, and that’ where it’s staying. ”

On the new album, there’s a cover of Bluebirds Over The Mountain that you recorded with Chrissie Hynde of The Pretenders? How long have you known each other?

“About thirty-five years, forty years. Just en passant. I like the sweetness of the song. It’s cute, and it’s a song I used to sing when I was a kid, before I was a singer. It’s a sort of nursery rhyme.”

You’ve announced live dates in America and Australia. When are you going to see you in Europe, summer 2018?

“Yeah. They’re working on it now, talking to people in Istanbul and Beirut, and we’ll make our way around you guys, I hope.”

With the Sensational Space Shifters, you always play some Led Zep stuff. Any idea what it’s going to be this time? Earlier this year you did Kashmir with Nigel Kennedy.

“Yeah. It’s not a song I would normally do, but I mean, when else to do it but with an orchestra and Mad Man Kennedy? It was good. It was great to have an orchestra around on it. Really good.”

How do you keep up with what’s going on in music? I don’t.

“Things just come past me. If I was a DJ on the radio, I would get all the new material I could ever wish for. Sadly, I’m not, so sometimes I miss things completely. It’s a big world, music, now, and some of it gets to me and some of it doesn’t.”

But there’s very little going on in rock music these days, wouldn’t you agree?

“Well, that’s a bit of a blessing. How do you mean? Well, I think it ran out of steam a little bit, didn’t it? Kind of. It probably peaked, did what it had to do, and now the hybrids of rock have become like Them Crooked Vultures and people like that, which is good music, but it’s not rock. Well, maybe it is rock. Maybe my idea of what rock was probably was a bit lost in translation.”

What do you think about the rumors that keep popping up about a Led Zep reunion tour in 2018?

“It shows you that people have nothing else to write about, obviously. And that’s kind of sad. All these magazines and internet platforms should be supporting new music and help new musicians to find an audience, instead of dwelling on the old crap all the time. It’s like there’s nothing new and exciting out there anymore, when in fact there is. So stop living in the past. Open your ears and your eyes. It’s not that difficult, is it?”

But don’t you find it amusing sometimes to always be reading in the press about your future plans?

“It is kind of funny, I have to admit. But, hey, there’s better ways to entertain yourself, believe me.”