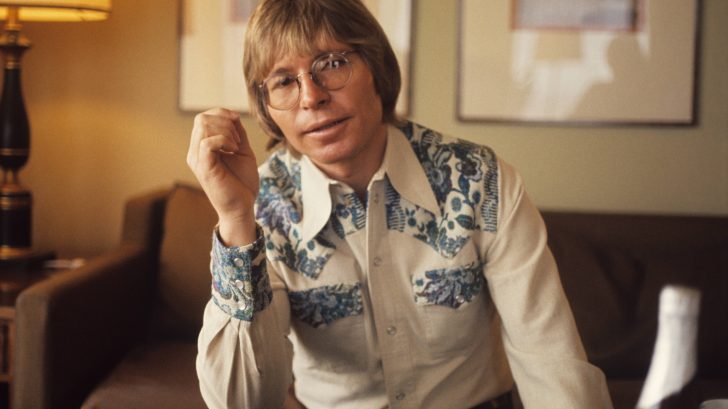 John Denver poses for a portrait in his hotel room in 1979 in Amsterdam, Netherlands. (Photo by Gijsbert Hanekroot/Redferns)

No Wonder He Became a Wildlife Superstar

John Denver was the son of an Air Force pilot who spent most of his time in the New Mexico wildlife. Denver was inspired by flight and nature and spent much of his time singing and writing about the great wild. Of course spending so much time in the mountains and desert guided him towards country music. In 1965, he began his music career and wrote his first hit “Annie’s Song,” on a Colorado ski lift.

In 1969 he released his first album Rhymes and Reason’s under RCA Records. “Take Me Home Country Roads” was released in 1971 and was his first million selling single. Rocky Mountain High was his follow up album in 1972. His Greatest Hit’s album followed and was one of the best selling albums ever for RCA Records with sells over 10 million copies sold. Unfortunately, he was still underrated despite being awarded Entertainer of The Year by the Country Music Awards in 1975. He was deemed as a “light-weight” by many Country Western music fans.

From Country Roads to Outer-Space

One of John Denver’s truest passions was conserving wildlife and bringing light to space exploration. He did continue to perform and record through the 1980’s but geared his stardom towards causes greater than himself. Land conservation, working towards ending world hunger, and space education were his intense advocacies.

“We can’t not do it, we must continue our exploration!” Denver has said about advocacy.

Contrasting his seemingly squeaky clean image, the 1990s had a rocky start for the singer, including alcohol abuse. Despite the misfortune, he was awarded for writing over 300 songs in his career during the Song Writer’s Hall of Fame in 1996. The following year in 1997, he wrote his last song “Yellowstone Coming Home,” for a nature series. That same year on October 12th, he crashed a plane he was piloting- into Monterrey Bay, California.  The hall of famer received his only Grammy award posthumously for his last album “All Aboard”. John Denver’s ashes were returned to nature in The Rocky Mountains.

Wow! Mötley Crüe originally released “Kickstart My Heart” on their 1989 album, “Dr. Feelgood.” Although it only peaked at #27 on the US Billboard Hot 100, it became one of their most popular and enduring songs. Written by bassist Nikki Sixx, it was famously inspired by his overdose accident. Guns N’ Roses drummer Steven Adler […] More

Check It Out Unless you’ve been living under a rock, chances are, you’ve seen at least one cover from Steve ‘N’ Seagulls. They went viral for their amazing and jaw-dropping versions of several classic rock hits. We’ve already heard them take on AC/DC songs, but have you ever wondered what Janis Joplin’s “Piece of my […] More

Meet Sir Elvis Country music is big in Kenya. There are radio stations dedicated to this particular genre, and they even have their own country musicians. Sir Elvis (born Elvis Otieno) is Kenya’s king of country music. His father was a preacher, and yes, his parents named him after Elvis Presley. It wasn’t long before […] More

Fitting In and Being American Meet Bruce Wang. He’s an international student in Texas who decided to transform himself after moving there for school. The first time he arrived in the US, he didn’t have a Southern accent. Interestingly, he learned it by watching Duck Dynasty – the popular American reality television series, which aired […] More

Check It Out The lockdown has forced us to get creative in keeping ourselves busy. Some people learned to cook and bake new recipes, others turned to crafts, and then there were families who jammed together. The Clark family belonged to the last group. They’re calling their band Colt Clark and the Quarantine Kids. The […] More