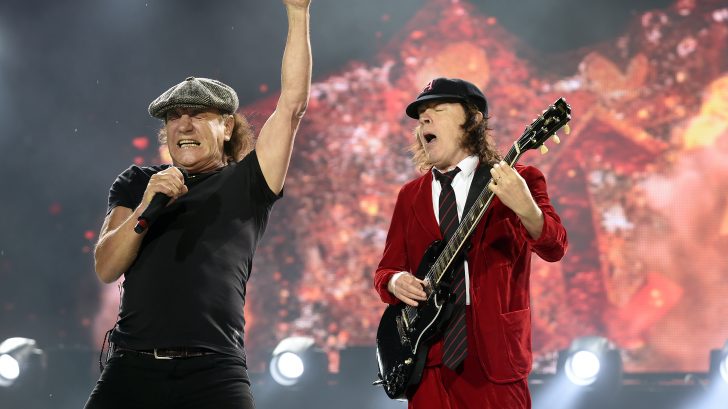 MELBOURNE, AUSTRALIA - DECEMBER 6: Brian Johnson and Angus Young of AC/DC perform on stage at the Docklands Stadium on the 6th of December 2015 in Melbourne, Australia. (Photo by Martin Philbey/Redferns)

Well, it turns out any hope of rock music making it to the Super Bowl this year is out of the question. Seems like they’ve booked pop band Maroon 5 alongside with rappers Travis Scott and Big Boi to headline. Whoopie. Don’t get it twisted, Maroon 5 is a very musically talented band with great musicians and Adam Levine has incredible vocals, but it’s hard to imagine a super high-energy performance just because the nature of their songs. Then you got rap music on their too. Oh great.

If AC/DC Headlined The Super Bowl Half-Time Show, What Song Should They Start With?

There are several options here. One good one would be Thunderstruck. Just the build-up with that riff seems like a good intro to the show. Then you got Shoot To Thrill.

But there’s just one thing we can’t get away from. That was how well they performed at the 2015 Grammys. If you don’t recall, they opened up the show with Rock Or Bust. That honestly, was perfect. You could just imagine the Super Bowl stadium starting off with the lights off. Then you hear that intro with Angus Young “dun dun dun dunnn”….

Our Fantasy Super Bowl Half-Time Show Would Start Exactly Like This: