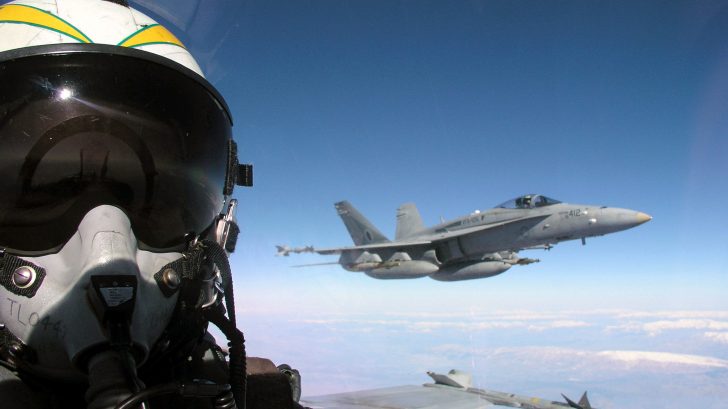 Military fighter jets are rock and roll as hell. Just look at them, they are massively powerful machine birds protecting the sky- protecting you. You gotta see it to believe it… to feel it.

The German rock band, Scorpions, released “Rock You Like A Hurricane” in 1984 on their ninth studio album, Love At First Sting. The track reached #25 on the US Billboard Hot 100. The song has one of the best guitar riffs of all time, played by Matthias Jabs. Set this song to a F/A-18 Hornet or Super Hornet taking off and landing on a USS Enterprise (CVN 65) and you have a high-speed adrenaline rushed music video. BAD ASS.

American singer, Kenny Loggins gave Top Gun one of the most epic soundtracks with his 1986 hit “Danger Zone.” Obviously a fitting song, the ominous lyrics set to high powered rock make for a “come and get it,” type vibe. Just watch The NAF Blue Angels thrust into the sky during the El Centro Air Show.

The United States Navy Flight Administration Team sent out The Blue Angels into the air for another excellent demonstration of their training. “Dreams” by Van Halen is a great tribute to these service men, who’s sole mission is to protect our nation’s dreams of freedom. Rock band, Van Halen, released the track in 1986- which was a big year for synth rock. The song reached 22 on the Billboard 100 and was charted as a single.

These Russian SU-27 fighters blast upwards against gravity. They takeoff during the rising intro of Australian rock band, AC/DC ‘s “Thunderstruck.”  The song was released as a lead single on the 1990 album, The Razors Edge. It was another instant AC/DC classic rock anthem. Everything about this song is fueled with energy. “Thunderstruck,” rose to #5 on the Billboards.

BRRRRTT- that’s an A10 Thunderbolt II. The Air Force must love piloting the Warthog, because it shows. They are fearless in what they do and certainly make their country proud. Mötley Crüe is also a great American symbol of pride- that is, if you love rock and roll. Released in 1989, off their legendary Dr. Feelgood album, the track reached #27 on the Billboard. The story goes that this song is injected with adrenaline- inspired by a literal revival of bassist Nikki Sixx’s heart.

This song is actually a cover! “Wild One” was actually penned by Australian rocker Johnny O’Keefe with The Deejays in 1958. Iggy Pop covered the song for his 1986 album, Blah Blah Blah, under the title “Real Wild Child.” The song was Iggy Pop’s only UK Top 10 Hit. There’s a perfect symbiotic rebel vibe between the song and footage of these fighter jets.

Nina Klimova is a charming Russian fighter pilot with excellent music taste! She flies a Mikoyan-Gurevich MiG-19: a second generation, single seated Soviet jet, with a twin engine. This aircraft is capable of supersonic speeds! And what does she like flying to? Pink Floyd’s “Learning to Fly,” which was released on Only Music in 1987. Cool facts: the voice-over  in “Learning To Fly” is drummer Nick Mason’s voice during a flying lesson AND David Gilmour owns Intrepid Aviation!

This Sammy Hagar track goes perfect with aviation footage! Hagar’s Never Said Goodbye (1987) included “Eagles Fly”- which peaked at 82 on US Billboards Hot 100! Watching this footage makes any American feel damn proud to be represented by such brave men and women.

A Sky Pilot is military chaplain! So, Eric Burdon sings the song from the perspective of a chaplain. It’s a heartbreaking song that reveals the reality of war, and the fate of soldiers in the 1960s and 1970s. “Sky Pilot” was released off of Eric Burdon and The Animal’s, The Twain Shall Meet in 1968. This video captures the feeling perfectly.

Do you like Terminator 2? Because this song was that movie’s anthem. Also… it gives you a fighter mentality if you blast it real loud! Guns N’ Roses released “You Could Be Mine,” in 1991 on Use Your Illusion II. Watch this fighter jet footage to feel just like the Terminator, a rock and roll legend, and a bad ass fighter pilot- all at once.