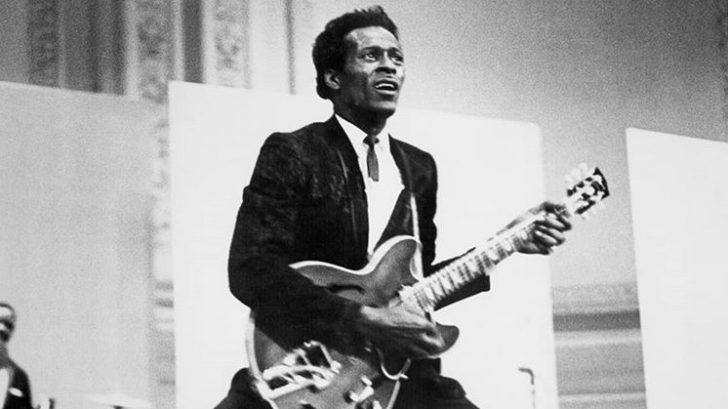 If you love rock and roll, chances are you’ve heard of Chuck Berry. Born in 1926 in Missouri, Charles Anderson Edward Berry or Chuck Berry is considered the “Father of Rock and Roll”. The most reputable names in the rock music industry acknowledge Berry as the embodiment of rock.

As the pioneer figure of rock music, Berry has a significant influence on the style and music itself. There are times you might find yourself listening to a song that you thought was his own.

Here are just some of them:

The guitar work in Stewart’s hit track took inspiration from Chuck Berry’s style. Music reporter Ed Masley indicated that the song “features some brilliant Chuck Berry-inspired guitar work that wouldn’t have sounded even slightly out of place on something by the New York Dolls”.

Stewart’s work was greatly influenced by Berry. When the great rock and roll icon passed away on 2017, Stewart tweeted: “He inspired us all. The first album I bought was Live at The Tivoli and I was never the same again.”

A song that’s notorious for explicit lyrics, innuendoes, and mentioning celebrities such as John Wayne and Steve McQueen. The song caused such controversy that it angered feminist groups. BBC would not air it due to racy overtones.

Keith Richards mimics Berry’s riffs. The song itself is a statement of the rock legend’s influence. Star Star gradually increases in tempo which is a classic style of Chuck Berry.

Dr. Feelgood redefined what was British post-punk music in the 70s. They had fantastic lyrics and songwriting capabilities. They also had the right influence on their guitar work.

It comes to no surprise that Chuck Berry was the main influence for All Through The City.

“When I first heard Chuck Berry, it was so exciting and mysterious,” said guitarist Wilko Johnson. “I thought: ‘I will always dig this music’. And I was right.”

He certainly was. All Through The City was Dr. Feelgood’s masterpiece. Johnson’s rugged cutting guitar play characterized the post-punk style of playing.

One of the tracks of their hit album Sheer Heart Attack. Just like Rob Stewart, Brian May acknowledges Chuck Berry’s influence right after the news of his death.

“Yes, I’ll own up straight away,” he wrote on his website. “There was a very deliberate direct quote in my playing in the coda of Now I’m Here, followed by another nod — the thrown-in chorus ‘Go go go little Queenie’…”.

Surfin’ USA was America’s No. 1 song in 1963. It’s also included in The Rock and Roll Hall of Fame’s 500 Songs that Shaped Rock and Roll.

If you listen carefully to the song, the tune sounds so similar to Chuck Berry’s “Sweet Little Sixteen”. This caused a rift between the Beach Boys and Berry’s publisher. Copyright issues rose and it was taken to court.

Murry Wilson, the band’s manager commented: “Inspired by Berry’s rapid-fire references to various American cities, he recast the song as a paean to a fun-in-the-sun sport…” Wilson said that the band’s intention was to recognize Chuck Berry’s influence on their music. But Berry’s lawyers were more direct: the Beach Boys plagiarized Berry’s song.

The case was eventually settled and Chuck Berry was credited.

No matter the style, no matter the attitude, Chuck Berry’s influence is still felt in any form of rock. Despite the aggressive attitude of punk, its origins still stem from the classic rock genre.

Legs McNeil, the editor of Please Kill Me: The Uncensored Oral History of Punk, writes:

Chuck Berry was truly the driving force of rock and he knew it. In an interview with Jet Lag magazine, Berry shares his thoughts on punk rock hit, God Save The Queen by the Sex Pistols.

“Guitar work and progression is like mine. Good backbeat. Can’t understand most of the vocals.”

The Beatles are referred to as the pioneers of modern music. It seems that no one could top The Beatles, but Chuck Berry did.

Due to its name and the time of its release, the song caused controversy in America. Back In The U.S.S.R. was released in 1968, the time when America was in unrest due to its involvement in the Vietnam War and an intensifying Cold War.

The title of the song appeared to be taking the side of America’s enemy. This led to rumors circulating that the song was written for the children of important Communist members. Talk about rocking the entire nation.

Subterranean Homesick Blues was a hit that even made John Lennon envious. The Beatles’ songwriter and guitarist believed he couldn’t make as captivating as Dylan’s hit track. Listed by the Rolling Stone as the 332nd Greatest Song of All Time, the song was parodied and referenced by artists and musicians alike.

Dylan has confirmed that the song was a direct inspiration by Berry: “[The song is] from Chuck Berry, a bit of ‘Too Much Monkey Business’ and some of the scat songs of the ‘40s,”

In an interview with Rolling Stone magazine, Clark admits that Travis County would not be possible without Chuck Berry.

“It’s one of the first songs I guess you could say I ‘wrote,’” he stated. “But it’s a direct influence of listening to Chuck Berry. I was just speaking the truth: It wouldn’t be possible without him. That’s true of a lot of music, but that’s a whole different thing.”