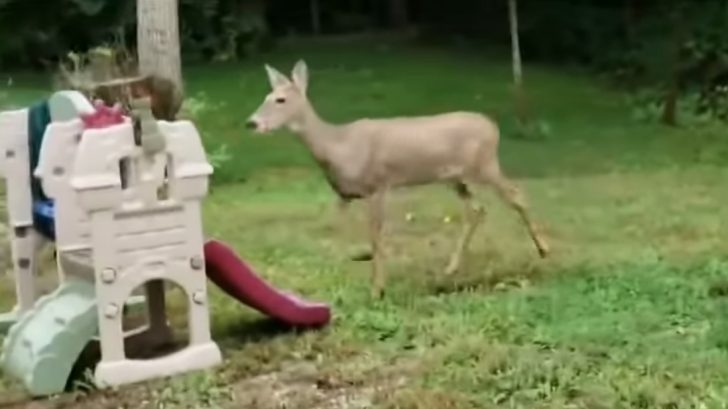 The internet can sure house a lot of funny and even unexpected things. From cat videos to people making a fool of themselves, surely we can find a variety of entertainment. Apart from cute or hilarious videos, sometimes there are captured moments that are quite unbelievable.

One such internet content that is widely popular is animals performing intelligent or even near-human actions. One example would be a deer. Deers are majestic, elegant, and intelligent creatures. They are certainly one of the craftiest animals alive and it’s quite thrilling to see such creature get innovative.

Take for example of this video of a “drunk” deer accidentally playing the intro of Phil Collins’ hit “In The Air Tonight”. It was a flawless execution on the song’s drum section with the use of a mere outdoor plastic castle. Did the deer had too much to drink? Or perhaps deers are evolving faster than we thought.

An Australian filmmaker captured this hilarious moment when a deer leisurely strolling in a yard, heading towards a plastic castle playhouse. As the deer walked through clumsily through the playhouse, the drum solo of “In The Air Tonight” was executed perfectly. And like a true performer, the deer regains its footing and walks away as if nothing happens. Probably those few shots of vodka gave this deer such confidence.

Whether the deer was intoxicated or not, they are now overcoming their physical limitations. They are now creating music that is on the levels of acclaimed musicians. With only a mere plastic toy castle drums, the deer managed to execute the song’s drum solo. No vocals, no guitars in the background, just pure talent right there.

Probably Phil Collins would consider getting some tips from this majestic creature. Videos like this are what the internet is made for. Fleeting, filled with simple hilarity, and a creative video editor.

Kudos to you, deer. If only Phil Collins could see your magnificent rendition, you would probably be a star right now.