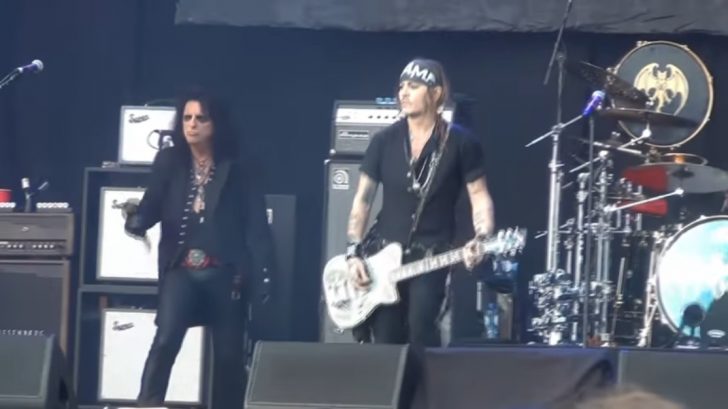 Alice Cooper is usually the one who provides the vocals whenever the band would perform. However, for this performance, Depp had the microphone and sang an astounding cover version of David Bowie’s 1977 classic hit song, Heroes. Cooper was doing the background vocals this time.

At that time, Hollywood Vampires were touring Europe.

In an interview with London’s Evening Standard, Cooper shared that Depp was indeed a talented musician in his own right. He noted:

“He’s not new to playing on stage – people are going to be very surprised when they hear him play because they know him as Jack Sparrow. When they see a guitar in this band they’re going to say, ‘Wait a minute. I didn’t have any idea he could play like that’. He’s a real guitar player. I wouldn’t be working with anybody that wasn’t as good as anybody I’ve worked with normally.’”

Johnny Depp may be widely known primarily as an actor, but his guitar skills should not be underestimated. Alice Cooper once mentioned that even Joe Perry was impressed by Depp’s guitar skills that he asked him for lessons.

Cooper informs EonMusic that Depp’s knowledge on the guitar is actually quite profound:

“Johnny is one of these guys that just loves that era, and he’s a killer guitar player. There’s a movie called Chocolat and he plays this gypsy guitar player. He does all this Django Reinhardt stuff– and it’s really him. It’s not somebody playing for him.

“Joe Perry heard that, and he called up and said, ‘Can I get guitar lessons from you?’ So that’s how good Johnny is.’”