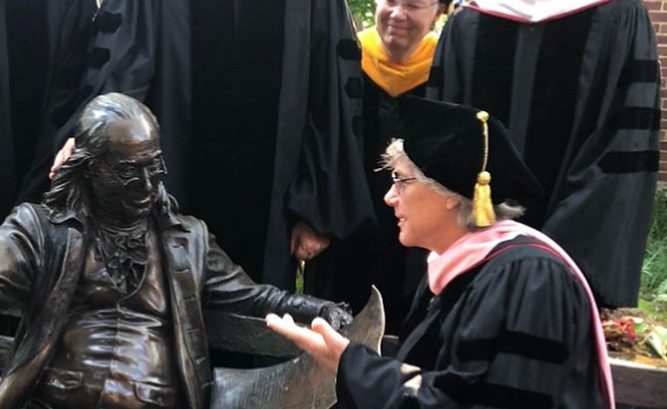 On Monday, May 20, 2019, Jon Bon Jovi has received an honorary Doctor of Music degree from the University of Pennsylvania at Penn’s 263rd Commencement at Franklin Field in Philadelphia. The rock star also shared photos taken during the ceremony. Interestingly, the rest of the graduates erupted into “Livin’ on a Prayer” as the singer’s honoris causa salute.

It’s better to be a doctor than be in need of a doctor. Thanks @uofpenn and congratulations to all the graduates.

Bon Jovi shared his photos in his official Instagram account with the caption “It’s better to better to be a doctor than be in need of a doctor.” It showed his fellow graduates who posed with him at the university’s “Ben Franklin on the Bench”.

It’s may come as a surprise to most, but this isn’t the first time an educational institution has honored Bon Jovi. In 2001, he was given an honorary Doctorate of Humanities by Monmouth University.

Bon Jovi’s previous philanthropic works were also acknowledged in the ceremony. The singer was also praised for his humanitarian works by the university president, Amy Gutmann during the commencement. The university wrote in their website acknowledging his works as Chair of the Jon Bon Jovi Soul Foundation.

“Mr. Bon Jovi is also Chair of the Jon Bon Jovi Soul Foundation, founded in 2006 and dedicated to supporting innovative community efforts to break the cycle of poverty and homelessness. The Soul Foundation funds partnerships that benefit temporary shelters, transitional housing for teens, permanent supportive housing (including for veterans and special needs populations), and home ownership opportunities. In 2011, with his wife Dorothea, Mr. Bon Jovi opened the JBJ Soul Kitchen community restaurant in Red Bank, New Jersey, with a pay-it-forward model serving both in-need and paying customers. In the aftermath of Hurricane Sandy, a second location in Toms River, new Jersey opened. These community restaurants have since served over 90,000 meals.”

Bon Jovi’s achievements seems to be flowing. Last year he was inducted into the Rock and Roll Hall of Fame. It was in April 14, 2018, when radio host Howard Stern had to honor to induct the singer into the Hall and amongst the legends.