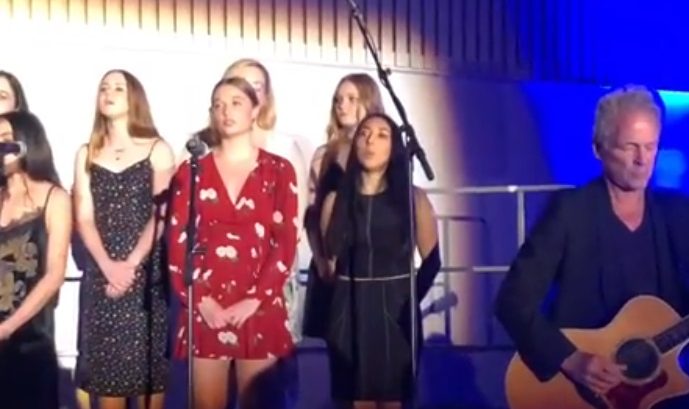 Lindsey Buckingham performing with his daughter and other students for the first time since his open heart surgery. Photo Credits: Instagram / kbchrush

After his emergency open heart surgery done in early February, Lindsey Buckingham is back on the scene and had just performed last weekend.

Kristen, Buckingham’s wife, shared this news over social media about the guitarist’s well-being. Buckingham had just attended his daughter Leelee’s high school graduation on May 17. During the graduation ceremony, he even accompanied Leelee and other students perform “Landslide”, a Fleetwood Mac 1975 classic hit.

“Last night was epic. First time I’ve seen Lindsey play in the last 4 mos, all the while Leelee ending her high school career. AND she sings a little Landslide with her dad. I cried, I’ll admit it. Never know what’s ahead so enjoy the moment… ”

Last night was epic. First time I’ve seen Lindsey play in the last 4 mos, all the while Leelee ending her high school career. AND she sings a little Landslide with her dad. I cried, I’ll admit it. Never know what’s ahead so enjoy the moment…

The former member of Fleetwood Mac is still recovering from his major surgery. The surgery had damaged his vocal chords and the couple are hoping that the damage is not permanent. They are now reportedly seeking professional advice and help.

“The love and support for Lindsey and our family from all of you means the world,” tweeted Kristen on May 20. “Thank u! Please think good thoughts this week and send L the best healing vibes as we head east to meet with a vocal specialist. We’re ready for whatever is next. Love conquers all.”

Lindsey Buckingham was best known as the lead guitarists and vocalists of Fleetwood Mac. The group was very successful, however, it was wrought with dispute, both creatively and personally. Buckingham left the group in 1987, but rejoined in 1997.

However, just last year Buckingham was fired from Fleetwood Mac. This reportedly happened after Stevie Nicks presented an ultimatum to the group: Buckingham leaves or she will. Buckingham was informed by band manager Irving Azoff that Nicks didn’t want to perform alongside with him and wouldn’t agree to go on tours as long as he is still associated with the band. This prompted the guitarist to file a lawsuit over his wrongful dismissal which was settled last November.