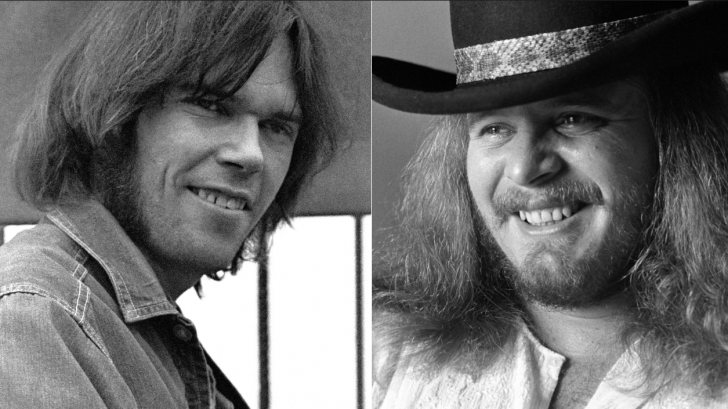 The Greatest Feud That Never Was

When Neil Young’s scathing criticism of the South and its ugly, painful history with racism came out to play in “Southern Man” and “Alabama,” it prompted a direct and measured response from Southern rock’s favorite son – Lynyrd Skynyrd frontman Ronnie Van Zant.

The result was “Sweet Home Alabama” – a spirited celebration of all things Southern, complete with a now famous nod directed squarely at Young (“Well, I heard Mister Young sing about her/Well, I heard ole Neil put her down/Well, I hope Neil Young will remember/A southern man don’t need him around anyhow”) and just like that, a feud between the two was born.

Except for the part where there was no feud between Neil Young and Lynyrd Skynyrd.

Lynyrd Skynyrd frontman Ronnie Van Zant did take offense to Young’s songs, feeling that they weren’t a proper representation of the South and at worst, an unfair shot at regular folks like himself who called the South home and hoped to do enough good to maybe drown out some of the ugliness.

But as Young and Gary Rossington tell it more than 40 years on, any idea of a feud stemming from “Sweet Home Alabama” and Young’s tracks is nonsense, plain and simple.

“We loved him,” Rossington told Uncle Joe Benson, host of the Ultimate Classic Rock Nights radio show. “We loved his lyrics and his music, and Ronnie was a real big fan of his. He just put that verse in there about him because we had just recorded at Muscle Shoals and were doing clubs all around small towns in Alabama. And it was beautiful. We loved it and the people were great.”

Of Neil Young, he made his and the band’s feelings clear: “…we loved him — always have and still do. A lot.”

Young, who himself is a fan of Lynyrd Skynyrd and of Ronnie Van Zant’s lyrics, used the event as a learning experience – one that proved to be deeply humbling, especially in the wake of Van Zant’s death in 1977.

“I think “Sweet Home Alabama” is a great song. I’ve actually performed it live a couple of times myself. My own song “Alabama” richly deserved the shot Lynyrd Skynyrd gave me with their great record. I don’t like my words when I listen to it today.”

Taking it one step further, there were actually plans to collaborate on Young’s “Powderfinger,” written specifically for Lynyrd Skynyrd. Sadly, this never came to be; in October 1977, the plane carrying Lynyrd Skynyrd to their next show in Baton Rouge, Louisiana ran out of fuel and crashed in a wooded area near Gillsburg, Mississippi, killing Ronnie Van Zant along with bandmates Cassie and Steve Gaines and road manager Dean Kilpatrick.

Shaken, Neil Young responded in the only way he knew how. He paid tribute to Ronnie Van Zant at a Miami, Florida benefit concert in the weeks following the crash, with a special performance of “Alabama” that segued into Van Zant’s own “Sweet Home Alabama” – a fitting tribute from one legend to another that we’re sure Ronnie would have gotten a tremendous kick out of.

We’ll always mourn the fact that two of the greatest songwriters of the 20th century never got a chance to sit down and collaborate – but for now, we’ll settle for knowing that the respect Neil, Ronnie and Lynyrd Skynyrd as a whole, had for each other trumped any notion of a silly feud.