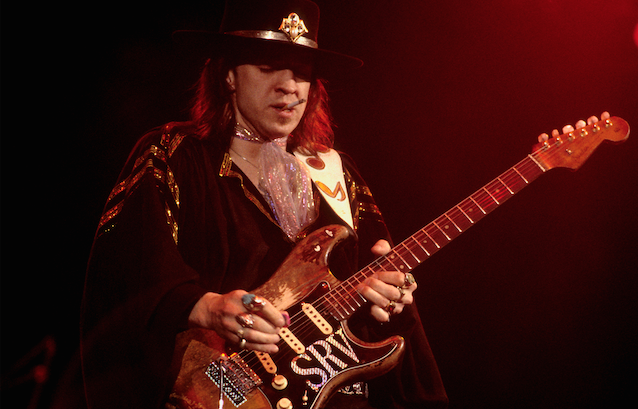 Stevie Ray Vaughan is a Texan guitar god. His way of playing has an instantly defined signature. Often recognized as the blues scale or even “the voodoo blues scale,” Stevie Ray has made this sound timeless along with his soulful predecessors. His inspirations were his older brother Jimmie, the gypsy/jazz guitarist Django Reinhardt and rock-influenced, Jimi Hendrix.

The standard blues scale is played in E with a bluesy b5 or Bb added. To transition the blues scale into the voodoo sound, you lower each b7 to a 6 by substituting each D with a C#. Stevie Ray Vaughan picked a similar rendition of this scale in his timeless bluesy “Rude Mood.”

Another absolutely known style of Vaughan’s is the use of the b9+9. Though you don’t want to come off as a Stevie Ray Vaughan wannabe, there are ways that you can use the guitarist’s discernible style for your own inspired licks. Using the 9th intervals on the guitar is the best way of finding your Vaughan rhythm. An interval, the space between two notes, will be one of your main points of focus.

The blues scale is constructed of a “root,” b3, b5, P5, and b7. Apart from the b5, all these intervals are from the natural minor scale. Without the b5 this would not be a blues scale. This is where the 9th intervals come in- the root and the b3 have two notes between them. The first note is the b9 (one fret lower than b3), and the second note is one fret even lower, the 9th.

The interval that became Steve Ray’s “go-to” was the b9 + 9. Yet, not knowing when to end a good thing could be a problem. When this interval is repeatedly played it starts to sound sloppy on a blues tune. Steve Ray used them as “grace notes.”

You’re going to be using a compound interval (i.e. b9 +9) across multiple octaves. This is essential to playing a Stevie Ray inspired solo because you don’t ever stay in one octave. The scale you’re using will eventually repeat in whatever octave you’re picking. Using the blues scale with the b9 and 9 will allow you to master the style and give you the power to improvise any lick.

As far as the rhythm goes, Stevie Ray interchanged between two licks:

After you master these intervals and rhythms you can incorporate them into your own styles and ideas. Just use the 9 and b9 on other positions of the scale and you’ll keep the Stevie Ray blues vibe.

By stripping down the electrical prowess of guitar playing, you can get down to the basics the way that Stevie Ray Vaughan did. If you’re having trouble figuring out the licks, don’t be so hard on yourself. Stevie himself had a hard time reading music and would have others write the notes for him.

The video below will visually and audibly demonstrate how to get into a “Rude Mood” on your guitar, along with great solo examples that are simply inspired.