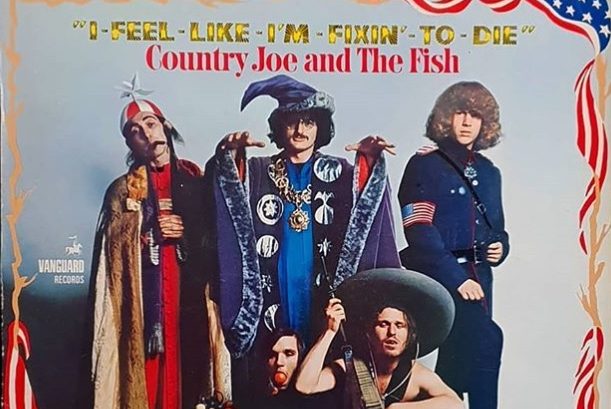 Innovative, sarcastic, and political, Country Joe and The Fish was a prominent psychedelic rock band in San Francisco Bay Area in mid- to late 60s. Formed in Berkeley, California in 1965, the band was founded by Country Joe McDonald and Barry “The Fish” Melton. McDonald and Melton were already in tandem before the band was formed, although they had recruited members later on.

The 60s was a time when America was a large player in the Vietnam War. Tensions were running high in the country: the government is divided and the people are angry. This was the time when Country Joe and the Fish entered the rock and roll scene.

They developed guitar tunes and distorted organ which was crucial to the evolution of acid rock. Apart from the lyrics and guitar tunes, Country Joe and the Fish pubicly wrote their songs on politics. They sang about recreational drug use, anti-war, and social movements such as Free Love.

Quite interesting to know that McDonald served 3 years in the US Navy, yet his songs are openly anti-war. One such example is “The ‘Fish’ Cheer/I-Feel-Like-I’m-Fixin’-to-Die Rag” he sang in the 1969 Woodstock festival. The lyrics convey that politicians, corporations, and high-ranking military officers are to blame for the war.

In addition to that, McDonald covered the horrors that returning soldiers face. Dark humor and political satire mixed with empathy, the song became the best anthems against the Vietnam War. “The ‘Fish’ Cheer/I-Feel-Like-I’m-Fixin’-to-Die Rag” became the band’s trademark hit.

Country Joe and The Fish disbanded and members have pursued individual careers in music but occasionally reconvene. Though the band didn’t reach the same stardom as other prominent psychedelic rock bands, McDonald continued to make music. Country Joe and The Fish is a little known band, but they were among the first to use music to convey political opinions. Harsh, but compassionate, McDonald is one of the first musicians to have profound views on the burdens of returning Vietnam veterans.