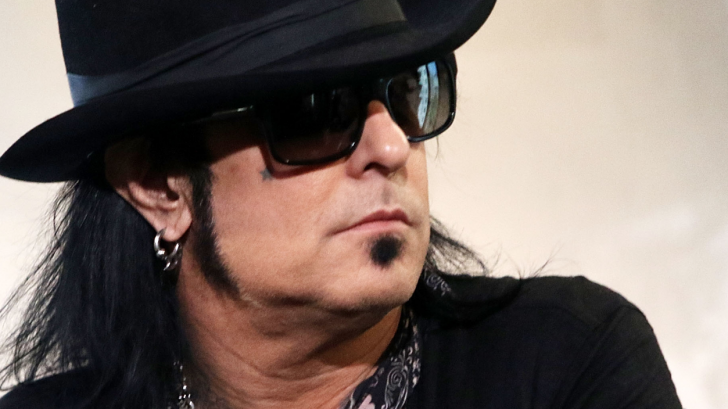 Mötley Crüe are having the time of their lives.

The Dirt was released two weeks ago to great fanfare, fans and critics alike hailing the brilliant adaptation of the 2001 book about the band’s wild and tragic history as the bad boys of Los Angeles. The accompanying soundtrack, which features new songs “Crash and Burn” and “The Dirt” featuring rapper Machine Gun Kelly (who doubles as the film’s Tommy Lee), catapulted Mötley Crüe to the top of the charts with their first top 10 album in the U.S. in a decade.

My car doesn’t have a bumper so I needed someplace to stick it. Special thank’s to the bug splat on the left.This next week starts the move into my new photography studio. Super excited. [email protected] #Leica @leica_camera @profotousa

When you factor that in with the laundry list of accomplishments and milestones Mötley Crüe hit over the years and the tremendous buzz caused by The Dirt that they should be up for induction into the Rock and Roll Hall of Fame’s class of 2020, right?

Eh…not really. Not if the powers that be have anything to say about it, anyway.

Not only will Mötley Crüe not be up for induction next year, they won’t ever be up for induction into the Rock and Roll Hall of Fame, according to bassist Nikki Sixx. Sixx, 60, shared that the topic’s come up recently and has reached a fever pitch since the release of The Dirt late last month; during an interview with bandmate Tommy Lee, the subject once again came up, this time in relation to the question of whether or not Mötley Crüe would ever perform together again.

“I was actually doing an interview with Tommy a couple of weeks ago, and we were asked if we would ever play together again,” Sixx began. “And Tommy said, ‘I don’t know. Maybe if we got into the Rock and Roll Hall of Fame or something, we could dust off a couple of our old classics.”

“I was, like, ‘Really?’ And he said, ‘Why not?’ But we don’t have any plans because we were told by the Hall of Fame that we would never get in, because of how we’ve acted, so that’s kind of it.”

The sad thing is, they wouldn’t be the first band to be shut down by the Rock Hall.

In 2007, The Monkees’ Peter Tork revealed that while he didn’t know why The Monkees have yet to be inducted into the Rock and Roll Hall of Fame or whether they even belong there, “it’s pretty clear that we’re not in there because of a personal whim.”

Bon Jovi frontman Jon Bon Jovi leveled similar criticism at the Rock and Roll Hall of Fame prior to his own band’s induction in 2018, citing several members of the voting board “making it their personal mission” to keep Bon Jovi from being inducted.

The powers that be had a change of heart and Bon Jovi entered the Rock and Roll Hall of Fame last year with former band members Richie Sambora, Alec John Such and Hugh McDonald, but while it’s possible, in Mötley Crüe’s case it’s not likely.

Which wouldn’t necessarily be a bad thing; after all, Mötley Crüe are a little too cool and according to guitarist Mick Mars, they don’t need an award to tell them that they succeeded – let the numbers speak for themselves.