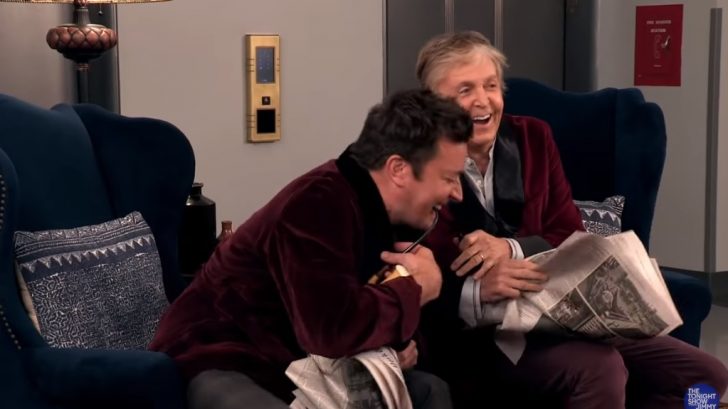 Paul McCartney is already well into his 70s, but that doesn’t stop him having that youthful, funny, and energetic personality.

McCartney, along with comedian Jimmy Fallon prank guests at 30 Rockefeller at New York City. This prank is part of Fallon’s show’s segment called “Elevator Surprise”. The other popular figure who had taken part in this segment was Michelle Obama.

The “Elevator Surprise” prank was when touring guests were led onto an elevator. Before guests would reach their intended floor, it would open on a wrong one. There, celebrities are waiting to surprise them with various antics.

The next set of guests had the same reaction upon seeing McCartney. One woman even attempted to approach the Beatle frontman.

The third group, Fallon appears and asks the guests if they want to see a magic trick. Then, holding up a large scarf drops it to reveal McCartney. Guests once again let out screams of surprise and amusement. One even expressed how she was reminded of her younger years, promising to herself to one day marry McCartney. It was a thrilling experience for her to finally see him up close.

When another group arrived, McCartney and Fallon were playing table tennis. One of the guests screams, “No way!” upon seeing McCartney. The Beatle member then responds “Oh yeah, way!” before the elevator doors closed.

Around at the end, McCartney and Fallon were singing “Drive My Car”. However, when the lift doors opened, no one was there. This signals the end of the prank and the two enter the lift together.

Judging by the screams of the guests upon seeing McCartney, Beatlemania is still alive and well.