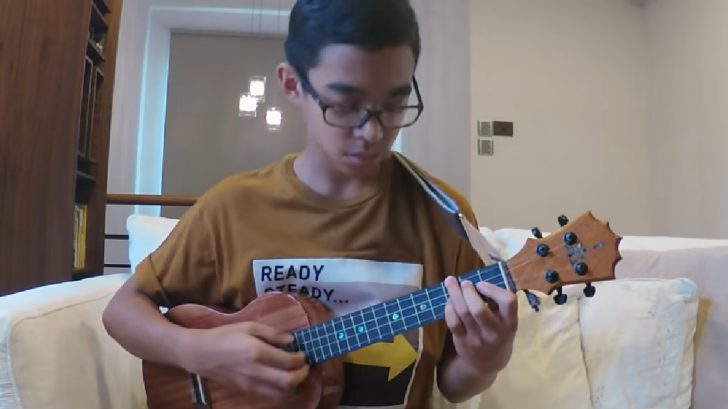 An instrument strongly associated with Hawaii, the ukulele is a popular string instrument.  A member of the guitar family, it’s pretty much one of the easiest instruments to learn and play. Starting off with simple chords, almost anyone can play popular songs in no time.

Meet Evan J De Silva, a Eurasian ukulele player residing in Singapore. Evan started playing back in 2013 when he was only 8 years old. Along with his talent on the ukulele, this young man has also found his passion for music.

One of Evan’s recent ukulele’s cover is Queen’s “We Are The Champions”. Evan’s cover is just astonishing and simply exquisite. At only 13 years old, he could already strum with skill on par with his adult counterparts. The arrangement he is playing is also his own version.

Evan’s shared that Queen has always intrigued him for as long as he could remember. According to the young YouTuber, his father introduced him to the band. Just like any other Queen fan, he was thrilled about the biopic Bohemian Rhapsody. Unfortunately, it is rated M18 in Singapore.

This cover of “We Are The Champions” has that authentic feel. The ukulele cover first starts off with a mellow tune. With Evan’s skill, he strummed this simple instrument to mimic Mercury’s soulful voice. As the cover progressed, his version didn’t stray from Mercury’s tune and the song’s melody.

The YouTuber’s strumming is on point. The chords capture the lyrics. It’s something anyone can find themselves singing along even though there isn’t a singer. Evan’s technique combined with his passion makes this ukulele cover a piece of enthralling music to listen to.

Evan’s version of the ukulele arrangement is the best one yet. It captures the Mercury’s singing wordlessly. The flow of the melody is simply effortless. Evan does not only put his technique into it but also his love and respect for Queen.

Check him out right here: