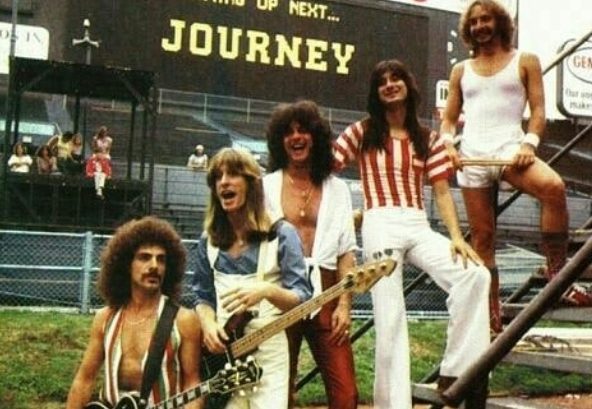 The Journey photographed before their concert during their Evolution tour in 1979. Photo Credits: Instagram / rockstory80

Written by Journey’s keyboard artist, Jonathan Cain’s inspiration for “Faithfully” came to him in a dream. The Top 20 hit song was included in the band’s eighth studio album that was released in 1983, Frontiers. “Faithfully” has since been considered as one of the decade’s classic power ballads.

Sure, there are many power ballads that have been produced in that era. But what makes “Faithfully” a great power ballad?

It’s a typical question that musicians would like to ask when writing a song. How to make a song unique? Jonathan Cain’s source of inspiration seems like a romanticized and uncanny way on how musicians write their songs. But it’s true. He took his inspiration from a dream he had and immediately wrote it down.

It only took him half an hour to complete the lyrics.

In an interview with Songfacts, Jonathan Cain shares on how he got to promptly finished composing the song:

“God gave me that song. I started it on the bus heading to Saratoga Springs. I woke up the next day with a napkin on the side of my nightstand and looked at the lyrics, ‘Highway run into the midnight sun.’ Then I got this supernatural download: This is the rest of the song.

“I wrote rest of it down, almost frantically. I’d never had a song come to me so quickly that it was anointed, supernatural. Literally, in 30 minutes I had written that song. I had the napkin in my pocket and put it on the piano. I had a big grand piano there by the orchestra. I played through it and I thought, ‘Man, this is good.’’”

“Faithfully” has a key in the B major with its tempo reaching 65 beats a minute in the common time. The song is actually about a musician’s struggles with marriage. It covers the topic of the burdens of raising a family and staying devoted to his spouse while on tour.

Cain wrote the song while still married to his first wife, Tané. Though he announced his pledge in the song, “I’m forever yours…Faithfully”, he and Tané divorced shortly after the song was released. Quite an ironic twist.