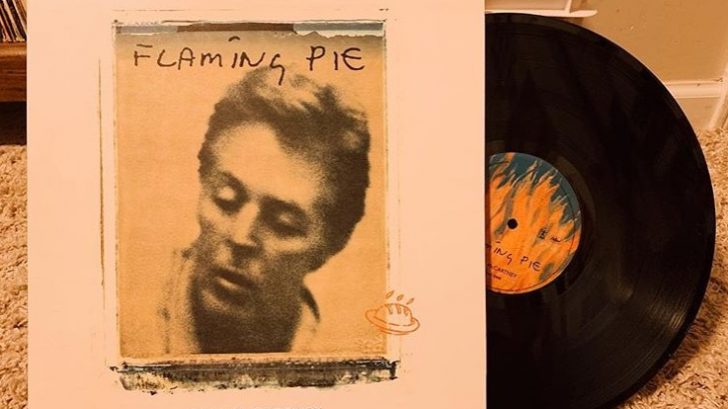 Paul McCartney’s musical career flourished even after the Beatles disbanded. He composed and produced songs that still capture the interest of his audiences. McCartney has been a musician for a long time that his “returns” seems more like he’s here to stay.

Among his numerous “returns”, Flaming Pie stands out as a true classic that has strong Beatle-esque characteristics.

After the production of the Beatles’ Anthology project, McCartney entered the studio with Jeff Lynne and proposed a record. This record would neither have the extravagant studio effects or signs of overproduction. Just pure and simple pop-rock.

Along with Lynne and the Beatles’ producer George Martin, it’s doubtful that an album would be anything but “pure and simple” as McCartney wants it. It came as a surprise that Flaming Pie pulled it off. It bears the signatures of the primary guitar-bass-drums arrangement.

Read on to see the rankings of the songs of Flaming Pie:

“I like blues but don’t do a lot of it so when Steve Miller said that he wanted to get me singing ‘Texas Blues’ it sounded like a good offer. I got on drums, he got on guitar, all live, and we had fun. Then Steve came up with some words, suggesting we use old blues lines like ‘I used to be bad but don’t have to be bad anymore’. I put bass on it, Steve did some solos, and we decided to sing alternate lines, singing at the same microphone. It was a jam, based on Steve’s riff and made up in the studio, and the vocal came in one take. Steve and I are donating our royalties on the track to LIPA. ”

“I was out sailing in a small boat; just me, the sail, the wind. Peaceful, like Heaven On A Sunday. That opening line led me through the song, I thought it’d be nice to play with James, my son, we traded phrases. Lovely to do.”

12. The Song We Were Singing

As the opening track of the album, The Song We Were Singing is a reminisce of the best memories of the 60s. Hanging out with friends, partying all night, drinking, and enjoying a chat, it sets the mood right.

Somedays is probably one of the best tracks in the album. It was just written in a mere two hours. McCartney exhibits his natural flair for songwriting.

“I’d driven Linda to a photo session for one of her cookery assignments. Knowing she’d be about two hours, I set myself a deadline to write a song in that time – so that when she’d finished and would say ‘Did you get bored? What did you do?’, I could say ‘Oh, I wrote this song. Wanna hear it?’”

McCartney recalls: “This is the kind of song you might hear when you’re driving across the desert in America, Easy Rider country.”

Featuring Linda McCartney as the backing vocals, Great Day is a song about holding on to hope.

The song is a simple song that is a straightforward rock and pop. Young Boy sets an example of what McCartney wants with the album.

Written during a holiday, Souvenir sports an easy-going and laid-back vibe.

The Beatles were all about having fun. When McCartney and Starr went for another jamming session after Beautiful Night, the track Really Love You was created.

“Doing Beautiful Night with Ringo wasn’t enough. I wanted more fun. So we jammed. The actor’s worst dream is being on stage not knowing what plays he’s in – doing this vocal was like that, you can go anywhere. You’ve got to clear your mind – and play bass – let your head to and ad-lib it all.”

McCartney exhibits his penchant for dedicating his songs to people who he cares about. Like “Hey Jude” which he dedicated to Lennon’s son, Julian, “Little Willow” was in tribute to Ringo’s first wife, Maureen. When Maureen passed away, McCartney composed this song to comfort her children.

The music video of Beautiful Night features Linda McCartney’s final appearance. McCartney humility and artistry exhibits itself in the lyrics once again.

McCartney strums his guitar for this acoustic song with which he describes as “a gentle love song that becomes a 1960s protest song”.

Holding true to the essence of the Beatles, The World Tonight has a smooth rock rhythm and the right blend of pop. Yet again McCartney exhibits his lyrical prowess with one powerful line of the song: “I go back so far I’m in front of me.”

Holding true to what the Beatles was all about, Flaming Pie captures the character of the band. McCartney composed much of the song during and after the Beatles’ Anthology production.

“Watching the Anthology also reminded me of the time that we didn’t take to make an album and of the fun we had when we did one. The Beatles were not a serious group… So I wanted to try to get back into some of that; to have some fun and not sweat it. ”