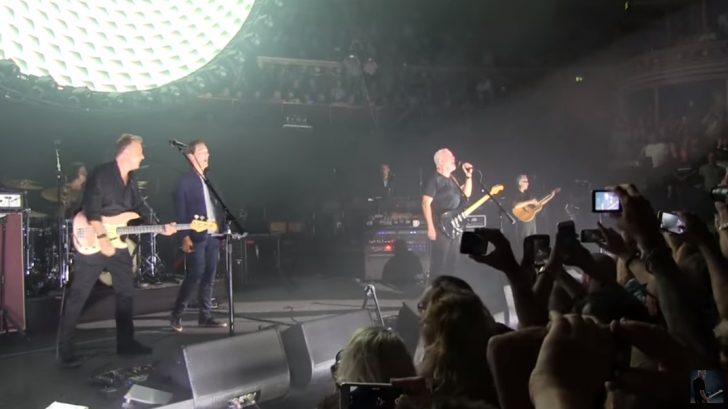 The Sherlock star went on stage and casually sang “Comfortably Numb” alongside Gilmore at the Royal Albert Hall one evening, to the delight of fans. Gilmour was in the middle of his tour in support of his album Rattle The Lock which was released last 2015. He surprised the audience by inviting Cumberbatch to the stage to sing with him.

Cumberbatch sang in a laid-back fashion and managed to get the audience’s interest. The actor was always known for his theatrics. Dressed in a dark coat and jeans, Cumberbatch accentuated a few lines along with some comically dramatic facial expressions.

However, Cumberbatch didn’t stay long on stage. He might totally steal the spotlight from Gilmour. It is Gilmour’s tour after all. As casual as Cumberbatch went on stage, he exited without too much fuss, shifting the audience’s attention back to Gilmour.

“Who knew he could sing?” joked Gilmour before the actor took over the vocal portion of the song. The portion was originally sung by Roger Waters. Waters left the band in 1985, following David Bowie, who also sang the same segment in the Royal Albert Hall a decade ago.

The audience couldn’t believe they would see Cumberbatch singing. This isn’t the first time the actor exercises his vocal cords though. Cumberbatch has recorded the song “Can’t Keep It Inside” in 2013. It was a song for the soundtrack for August: Osage County which he performed with musicians Kings of Leon and Bon Iver.

Benedict Cumberbatch performing Comfortably Numb with David Gilmour may be the most random collaboration I have ever seen live. pic.twitter.com/jXGvqE01WM

Cumberbatch isn’t shy about his love for music. He regularly shows up during gigs in between filming. His random appearances in gigs or shows don’t stop fans from sharing their surprise online.

“This may be the most random collaboration I have ever seen live,” expressed one fan in a tweet. Another fan wrote “No sh*t Sherlock.”

Watch the Cumberbatch sing alongside Gilmour in the clip below. This is probably the most British thing anyone can behold.