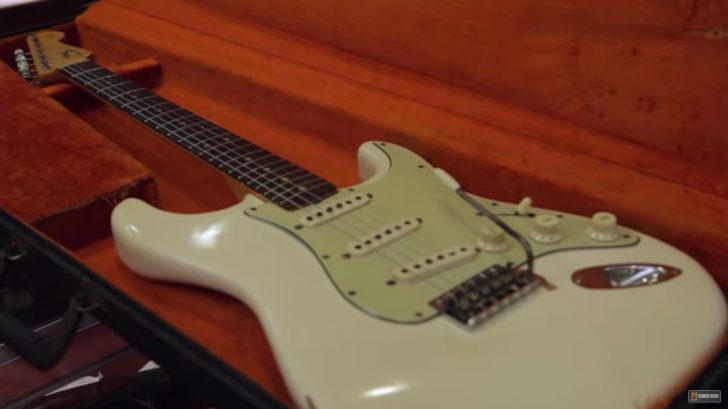 Was this really played by Jimi Hendrix himself? Photo Credits: YouTube / Pawn Stars

Jimi Hendrix was a legend. He did things to a guitar that no one had done before. Any plain guitar that was held by the Guitar God was instantly turned into a sacred relic.

That’s the case with this episode of Pawn Stars.

A man walks in claiming that he has a 1963 Fender Stratocaster electric guitar that was previously played by Jimi Hendrix himself. The man says that he would like to pawn it for a commendable amount of cash. Of course, Rick Harrison, or popularly known as “The Spotter” in the show, have some doubts.

Naturally, anyone can claim that a particular guitar was played by a musical icon, let alone Jimi Hendrix himself. Harrison calls in a friend who can determine its authenticity and value. The man who owned the guitar wasn’t deterred and accepted.

If ever the electric guitar is proved as an authentic piece owned and played by the legend himself, then it would become one of the shop’s most prized acquisitions.

So Harrison’s friend arrives and starts to give a little background on Hendrix. Hendrix was a legend who was entirely self-taught, but he managed to get the guitar as an extension of himself. In however way Hendrix moves, the guitar’s sound would follow.

On to the authenticity of the electric guitar, they found a serial number stamped at the back. The serial number read as “L14985” which meant that this instrument was documented. It meant that the man’s claim was true: Jimi Hendrix did play this guitar.

The man who authenticated the guitar said that for this instrument its cost could fetch up to $750,000. $1 million if it were in an auction house. A dazzling price for an instrument that was once owned by the legend himself. It’s already considered a rock and roll treasure.

Harrison obviously wanted to have the guitar for the shop’s collection. He offered $500,000 for it. The man who owned it refused, saying that he would like the starting price to be $750,000 and above. Harrison makes a desperate offer of $600,000, but the man didn’t accept.

He eventually leaves the shop with the guitar telling Harrison that he will call if ever he changes his mind. The man then comments that he will not downgrade the price of something with so much value.

Check out the exchange here: