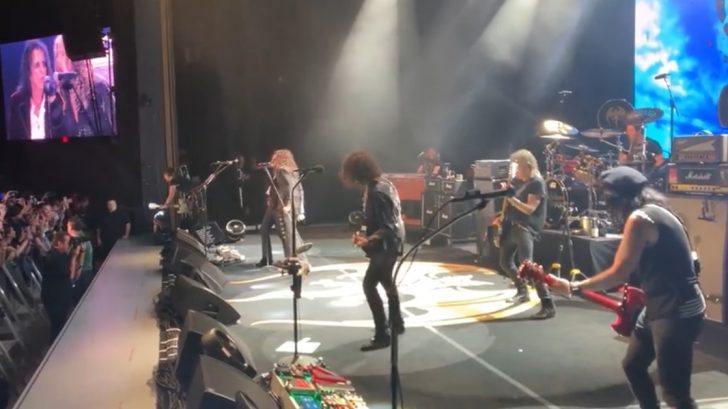 Steven Tyler just keeps on rocking! Joining his buddy Joe Perry, the fantastic duo performed alongside with The Hollywood Vampires. This glorious collaboration was held at the Greek Theater in Los Angeles, California.

The Hollywood Vampires are a rock supergroup. Its members include actor Johnny Depp, Alice Cooper, and Aerosmith’s very own Joe Perry. The band were in Los Angeles on Saturday night and delivered a performance at the performance art Greek Theater.

This is their gig that marked the second half of a seven-show tour that is set for this month. Hollywood Vampires also welcomed a few special guests in their performance. The guest list included Joe Perry’s close buddy, the Demon of Screamin’ Steven Tyler, and Alice Cooper’s rock star apprentice, Marilyn Manson.

Tyler surprised the audience with his special performance. He lent his voice for Hollywood Vampire cover of Tiny Bradshaw’s “Train Kept A-Rollin’”. This track is also a setlist of Aerosmith’s for the past years.

Like a true showman, Tyler delivers a fantastic performance. Ageless and effortless, Tyler owns the audience with his powerful vocals. Even though in his 70s, time doesn’t seem to slow down the Aerosmith frontman.

Hollywood Vampires’ performance in Los Angeles is in support of their new album called Rise. The album has a 16 tracklist, most of it is original works. It also features the single “Who’s Laughing Now” that has strong gothic characteristics. Their album will be available by June 21.

Hollywood Vampires has just begun their West Coast tour. The tour has seven dates and had begun on May 10th. The first venue of the tour was held at Join in Las Vegas, Nevada. The next stops are set in Los Angeles, San Francisco, Albuquerque, New Mexico and Scottsdale, Denver, and Arizona.

The city that will wrap the tour up will be at Indio, California. The last tour date will be on May 18th at the Fantasy Springs Casino.