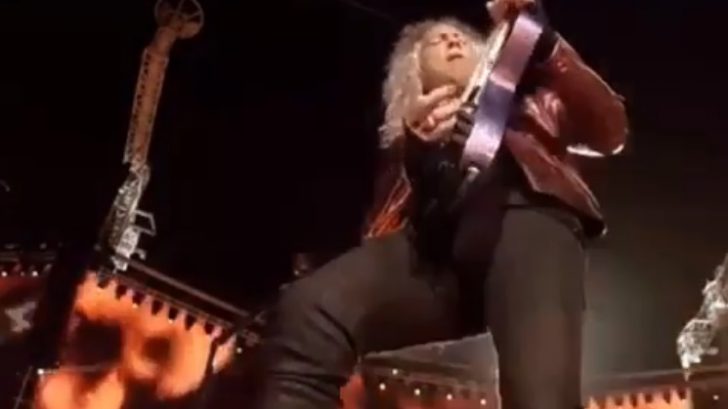 Hammett plays with intensity that even the wah pedal can't even handle it. Photo Credits: Instagram / metallica

How do you handle things when you slip on stage in front of thousands of people? Do you get up and pretend like it didn’t happen? Or handle it smoothly, continue playing like a rock star?

The latter was just the one that Kirk Hammett chose to do. Even fame doesn’t make anyone immune to embarrassing moments. The Metallica guitarist just had that when the band was performing in Milan, Italy. On the night of their performance, the rain was soaking the stage, but the band didn’t want to disappoint their fans and went on with the show.

As Hammett was drawing to the end of his solo on “Moth Into Flame”, he put more of weight on his wah-wah pedal. The pedal, which was apparently already soaked in rainwater, sent Hammett to a not-so-elegant fall. Hammett, however, handled it like a real rock star. He quickly bounced back, laughed, seemingly brushed it off, and continued to play.

Hammett didn’t take that moment too bad. After the show was over, he posted the video clip that captures his fall on Metallica’s official Instagram page.

#Repost @kirkhammett ・・・ Ummm- I slipped on my wet wah pedal. ? ? It rained so much I felt like I was playing guitar in the shower – #slipperywhenwet #wahwahwah #metallicafamily #Metinmilan @metallica

“Ummm — I slipped on my wet wah pedal. It rained so much I felt like I was playing guitar in the shower.” wrote Hammett.

Hammett took the opportunity to laugh it off and show to fans that even rock stars have their moments of clumsiness.

Metallica has recently started their latest European tour, WorldWired Tour. The tour initiated in Lisbon, Portugal on May 1. The band will tour across several countries before wrapping it all up on August 25.

Their WorldWired Tour was launched in 2016 to support Metallica’s recent album Hardwired…To Self-Destruct. All the dates have been confirmed for the band’s global tour. Let’s hope that none of them would face another slip-up like that.