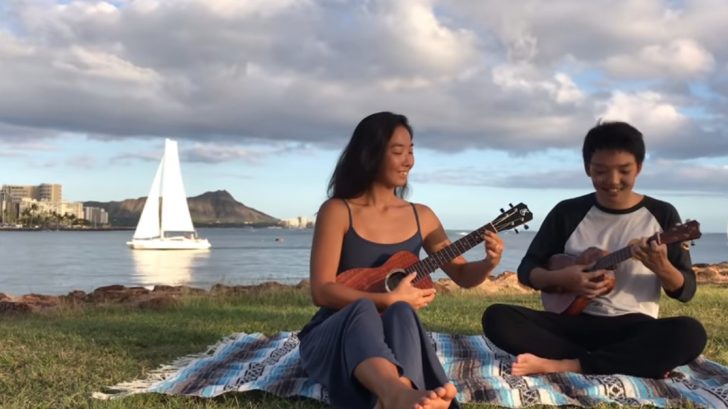 Queen’s music never ceases to amaze people. Even though Freddie Mercury has passed away, his works have never stopped inspiring musicians, both young and old.

Meet Honoka Katayama, a musician from Hawaii, who plays a magnificent ukulele cover of Queen’s 1978 track, “Don’t Stop Me Now”.

Honoka’s video has a natural charm to it. She and a companion played their ukuleles outside the confines of a room or studio. They opted basked outside with the open ocean air and sun.

Honoka, along with her companion, strums the ukulele with expertise. As each note varies, Honoka and her friend get it right. Their transitions are flawless and their coordination just feels natural. Plus, they look like they’re having fun.

Queen’s hit “Don’t Stop Me Now” was written by Freddie Mercury, both the lyrics and the music, while he was in Montreux, Switzerland. His feelings at that time were reflected in the lyrics like he felt unstoppable: “floating around in ecstasy,” “like a tiger defying the laws of gravity,” and “traveling at the speed of light.”

Listeners will find this song quite empowering, but it’s also obvious that the Queen frontman was throwing everything to the wind. Looking closer at the lyrics, it shows how Mercury was living on the edge.

I am a satellite, I’m out of control/ I am a sex machine ready to reload

It was clear that this would soon catch up with Mercury. Despite that, May once recalled that “Don’t Stop Me Now” was “a stroke of genius from Freddie.”

Honoka and her companion gave this Queen hit a unique breath of life. Though the song has that sense of elation, she plays it in a soothing manner, without digressing from the song’s original tempo or even tune. It doesn’t seem forced or anything dramatic, but simple and earthly.

Check out their awesome cover here: