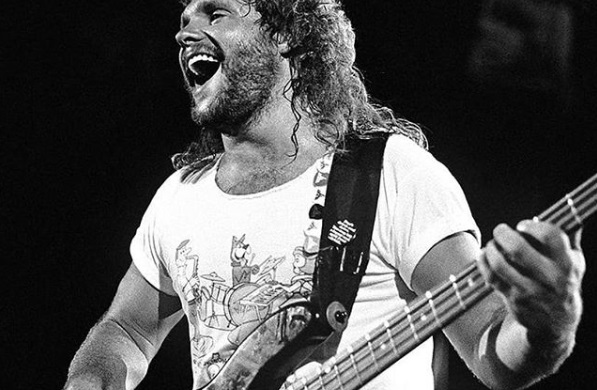 It was in 1986 when Van Halen reached out to Sammy Hagar. The band intended to replace their own lead singer David Lee Roth. That is quite a surprise, but this isn’t’ the first time Hagar’s name was associated with Van Halen.

Hagar, along with Van Halen bassist Michael Anthony, has confirmed what Noel Monk, the band’s former manager, wrote in his 2017 memoir, Runnin With The Devil: A Backstage Pass to the Wild Times, Loud Rock, and the Down and Dirty Truth Behind the Making of Van Halen.

In the book, Monk recalls that when the band was recording their first debut album, Van Halen, Ted Templeman, the producer, was not satisfied with Roth’s vocals. He mentioned that the band should take someone else instead. That’s when Templeman suggested replacing Roth with Sammy Hagar.

In a recent interview with Eddie Trunk, Anthony confirmed what was written in the memoir.

“That’s totally true. Ted did make a suggestion at one point, yes.”

Anthony supplies that before recording, they already informed Templeman that they wanted to sound different. They wanted to stand out. This is pretty understandable since Templeman produced another band called Montrose. From 1973 to 1975, Hagar was the frontman of Montrose.

But Hagar notes that he was not contacted at that time of recording. He also notes that Templeman himself revealed this information to him many years later. However, Hagar commented that he didn’t mind since Van Halen wouldn’t be complete without Roth’s era.

“The way it all went down is so much better,” shares Hagar. “The band has two lives, you know. And most bands don’t have two lives. I mean, you’re lucky to get one life out of rock and roll. To have two lives like that, I think it was better for the band, for the legacy. I came in and it worked, which was, like, against all odds.”

Hagar expressed that if he had been with Van Halen right from the start, the band wouldn’t make it and that “probably would have broken up”. Van Halen wouldn’t attain their hit albums in the mid to late 1980s.

Either way, when Hagar wasn’t involved with Van Halen was also important in his own career. Between 1978 and 1986, he released five solo albums which included his popular solo “I Can’t Drive 55.” In focus of his solo career, Hagar’s band, The Circle, has a lineup that includes Anthony, Jason Bonham, and Vic Johnson.

The Circle’s debut album titled Space Between is already available by May 10.

“From the bottom of my heart, those first few Van Halen records are great records, up to 1984, were great records,” Hagar stated. “I take nothing away from that. I couldn’t have walked into a band like that without that happening first. We became a stadium act anywhere in the world — all No. 1 albums. You don’t start that way. It’s almost like, well, Dave did all the dirty work, and I walked in and said, ‘Yeah!’[Laughs]”

Whatever problems Roth may have towards Hagar, he bears no animosity towards him. He intends to invite Roth to perform at the High Tide Beach Party & Car Show. He mentions that Roth was about to appear last year.