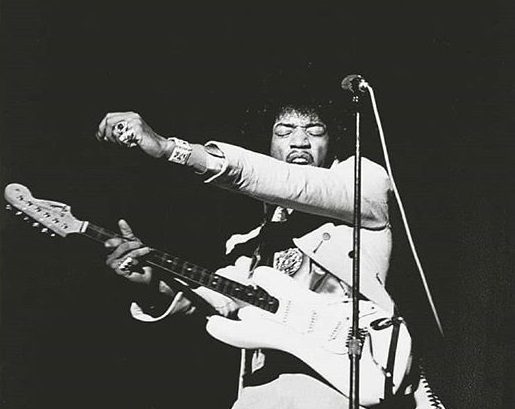 Jimi Hendrix was a legend in the guitar world. He was an excellent player who changed the way how the instrument could be played. In his heyday, he showed the world what he could do what other guitarists have never done before.

One of the most notable things about Hendrix is that he is left-handed. He played the right-handed guitar upside down. Blues guitarist Albert King could also do the same thing, but Hendrix was able to play upside down guitar just as well. His variations were just as good as if he was playing with his left hand. Why did Hendrix have to play with his right-hand if he was a lefty? The answer: his father forced him to since he believed being left-handed was the devil’s way.

Another laudable aspect of Hendrix is that he is self-taught. As a child growing up in poverty, neither Hendrix nor his parents could afford proper lessons. However, this became a vantage point. Hendrix was able to learn numerous chords without being restricted by traditional fingerings. Whenever other guitarists would watch Hendrix play, they couldn’t work out the chords or what he was doing.

Hendrix was also known to mix different genres into his music. Prior to his fame, he played for various artists. As a result, he had developed a style where he could play lead and bass guitar simultaneously. He also drew inspiration from those artists and didn’t mind mixing different genres. This made Hendrix’s playing sound so unique: there were so many genres in his music that he was deemed as an original.

Back then feedback was considered a nuisance. But not for Hendrix. He was a master at wheedling out strange sounds from the guitar. Hendrix utilized the feedback by cranking up and down the volume knob in his electric guitar.

One particular example of using feedback in Hendrix’s music was the intro in “Foxy Lady”. He begins the track with vibrato and gradually increases the volume. Then, suddenly, a wailing feedback blasts through the speakers. Within seconds, Hendrix merges the starting rhythm which moves the song. It was a sound that no one has heard of before and it awed audiences, wondering what they had just heard.

Thanks to Hendrix, the wah-wah pedal and the use of amplifier feedback. He brought it to the mainstream. His innovation is in use by countless bands and musicians.

Though Jimi Hendrix’s career came to a halt with his abrupt demise, his legacy made him immortal.