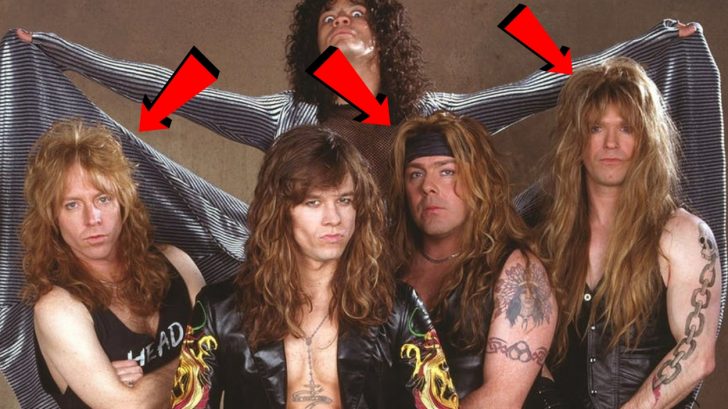 As Chris “Izzy” Cole makes his way through a luxurious mansion to get to the audition for Steel Dragon, he and his girlfriend find the vocal booth with an unsuccessful would be singer already in there. His appearance in this movie is very brief, but that wouldn’t be the end of this guy’s journey.

Who you’re looking at here is Ralph Saenz (aka Michael Starr), the frontman for Steel Panther, one of the most popular rock & roll bands on the scene right now. Steel Panther may be a parody band, but Ralph and his partners in crime have proven that they are some truly amazing rockers. Check out this video below for some proof!

He’s only called Thor in the movie, but that really isn’t too far from the truth in real life. Myles Kennedy from Boston is a veteran rock singer with years of experience playing with such bands as Alter Bridge, Slash, and even at one point being slated to become the singer for Velvet Revolver.

He has definitely come a long way from this role, and it’s obviously not where he got his start, but it did help him secure a gig with Alter Bridge, which was the offshoot of Creed (one of the biggest bands around at the time).

Disgruntled bandmate with little-brother syndrome in the movie, rock singer/heartthrob outside of it. Stephan Jenkins may not amount to much in this movie, but when he’s not telling people to get lost he’s fronting the wildly successful rock band Third Eye Blind, a band that has sold millions of records all over the world and won several awards for their albums and prolific songwriting.

Sure, this Steel Dragon tribute band never amounted to much, but Stephan is doing JUST fine!

Now this one was pretty damn hard to spot, but if you look hard enough and do some research you’ll find that former Black Label Society guitarist Nick Catanese actually has a role in ‘Rockstar’. Nick was a prolific rock guitarist often being the right hand man for legendary guitarist Zakk Wylde, who we’ll talk about in a bit, and was pretty instrumental (no pun intended) in developing the soundtrack’s heavy sound for the film.

This guy SLAUGHTERED it in this movie! Sorry, terrible joke, but seriously, Blas Elias, drummer for Slaughter and Trans-Siberian Orchestra had a pretty significant role in this movie. He provide his surprisingly good acting talents AND his drumming talents. When he’s not crushing it on the big screen, he’s doing great things on the drum kit and has always been regarded as one of the most prolific drummers in all of rock and roll.

His unique and charismatic style have set him apart from the rest and even today he still has that magic touch behind the drum set. Needless to say, he is underrated, but also incredibly gifted.

Jeff Pilson was in this movie because why the hell not!?! As the bassist for such bands as Dokken, Dio, and Foreigner among many other bands, it only makes sense that he would be recruited to play the bassist for a rock & roll fever-dream of a super group.

But in all seriousness, Jeff is one of the most respected and revered musicians not just in rock & roll, but in all of music. He is a thunderous bassist and if you ask me, there would really be no other choice to have play the bassist in this film than Jeff Pilson.

I could just go on and on about Zakk Wylde and his accomplishments, but what more can you say? As the longest-running lead guitarist for Ozzy Osbourne and frontman for Black Label Society, Zakk is one of THE most iconic and influential metal guitarists of all time. He has a style and charisma that are often imitated, yet never duplicated.

He is one of the absolute best, pure and simple, and he’s DEFINITELY got a Rock & Roll Hall Of Fame induction in his future.

Rock royalty himself Jason Bonham, son of Led Zeppelin’s late legendary drummer John Bonham, proved in this movie that not only were his drumming skills nothing short of stellar, but also that he is quite a gifted actor having multiple compelling scenes. His thunderous drumming helped BIG time in developing the soundtrack for the movie.

These days he is still a highly respected and influential drummer even drumming for Led Zeppelin at their reunion show in 2007. He is just as good as his Dad!