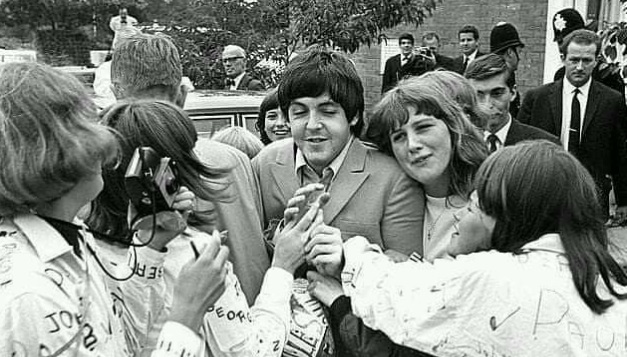 It was in October 13, 1963, when four young men took the stage in a variety show called Sunday Night at the London Palladium. These fellows just had simple tools in their hands: two guitars, a bass, and a simple drum kit. No one know what the Beatles had in store for the world that would change music forever.

Little did they know that these four men will spark the worldwide Beatlemania phenomenon.

Soon enough, mobs of adolescent girls would soon fill the streets, screaming, and jumping up and down once they hear the music play. It was uncommon at that time when young women would get so hyped over a band. The Beatles have made countless songs that millions of fans adored. But which were pivotal in sparking Beatlemania?

Let’s take a look at the 5 tracks that had made Beatlemania possible:

“Please Please Me” was the Beatles’ first track to take the #1 spot for four consecutive times. This achievement had prompted the Beatlemania in Britain. The single did so well that the band’s manager Brian Epstein pulled them off the road to record their debut album. The song was just the beginning of the band’s worldwide fame.

The track was an instantaneous hit in the Beatles’ native country, but it was still to get into American shores. This was a time when Beatlemania was forming among their young female fans.

“The huge crowd of girls that had gathered outside broke through the front door… Scored of hysterical screaming girls [were] racing down the corridors, being chased by a handful of out-of-breath, beleaguered London bobbies,”” recalled Geoff Emerick, the band’s sound engineer. “The [chaos] helped spark a new level of energy in the group’s playing.”

The Beatles’ first movie was taken from the title of this song. The movie raked in good reviews from critics and audiences and also two Oscar nominations. Back then, there were a lot of movies starring musicians, but most presented them as musicals and weren’t even satisfactory.

A Hard Day’s Night was a pleasant surprise since it really had value since it portrayed the day to day lives of members of The Beatles. The film was also a good way to commercialize the band. Through the film, they had earned more fans, further fueling the flame of Beatlemania.

A popular track that the band would play whenever they would end their live performances in the early days. It was always a huge hit. It was energetic and lively, and hordes of girls would scream over it. This prompted Lennon to sometimes scream out the lyrics.

The track that started Beatlemania in American shores. “I Want To Hold Your Hand” granted the Beatles to attain popularity across the Atlantic. It had transformed The Beatles into the biggest sensation the world has ever seen.

When the song aired for the first time in American radios, it was the time when the nation was recovering from the shock of the assassination of John F. Kennedy. The Beatles’ music had unexpectedly brought joy to cope with a mourning nation.

Soon enough, the Beatles performed in the Ed Sullivan Show in February 1964, which drew 70 million views. A number that would make history.