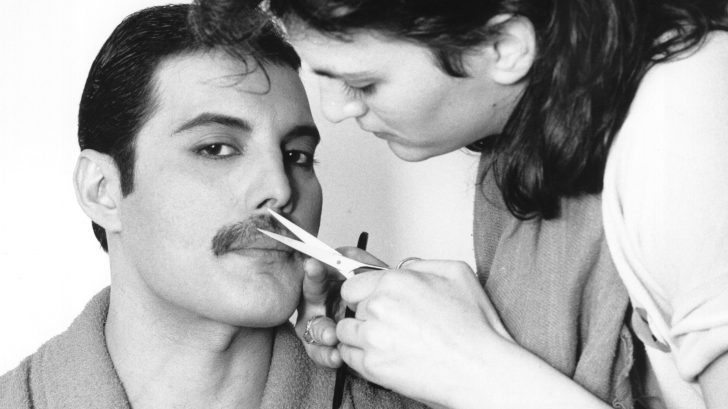 It’s a rock song of the ages. The six minute suite which became, “Bohemian Rhapsody,” was almost everything but ostentatious. Queen was known for crossing genres between rock/ glam/ and progressive. If their music seemed flamboyant it was because of it’s complexity. Mercury included multi-faceted vocal arias and a confusing plot. The man wrote all the solos (for Brian May’s guitar too) on the piano, with his left hand. He presented it to his bandmates in 1975 on phone books and scraps of paper. The amount of work put into after  he wrote the masterpiece is unfathomable.

Mercury’s long time partner, Kim Hutton, has said that the multiplexed rock opera was Mercury’s “coming out song.” Brian May, Queen’s guitarist has been a bit more vague by stating, “He concealed insecurities and problems in squaring up his life with his childhood. He never explained the lyrics, but I think he put a lot of himself into that song.”  Insecurities could have involved his strict religious upbringing (Parsi), his sexuality, and his musical abilities.

In Mercury’s words, “It’s one of those songs which has such a fantasy feel about it. I think people should just listen to it, think about it, and then make up their own minds as to what it says to them. Bohemian Rhapsody didn’t just come out of thin air. I did a bit of research although it was tongue-in-cheek and mock opera. Why not?”

We will never have a solid answer as to why “Bohemian Rhapsody” was written or what the songs means- but mystique is a beautiful and rare thing. It’s a relatable song for anyone who put’s up a good fight against an opposition then, moves on with their life despite the outcome.

“Bohemian Rhapsody” was  a work in progress for years. The lyrics “Mama just killed a man…” were among the first words written in the song. Mercury started writing it when he was still in college (1968), and he named it “The Cowboy Song,” because of the Old West feel he had initially vibed with.

Queen started the physical labor on the masterpiece on August 24, 1975. At the time, the band had only 24- track analog tape to work with. So, the 180 separate overdubs it took to record the track, caused the tape film to become almost transparent.  There were 70 hours of operatic sessions over 5 different studios for the vocals alone. The solos for guitars and bass were translated from piano to the intended instruments. This all resulted into a 6 minute song— which at the time was a no no.

A gong was even added to Roger Taylor’s drum kit, which makes for a fun music trivia game. Can you hear the gong in “Bohemian Rhapsody”?

Queen’s record label, EMI, was presented “Bohemian Rhapsody,” and their general manager of sales responded with, “What the f**k is this?” Elton John had the same reaction when he first heard the song. The British singer told Queen, “are you f**king mad?” Record producers urged Queen to cut down the song. Understandably, after all their strenuous work, the band refused. The EMI record label ultimately agreed to keep it at 5 minutes and 55 seconds.

The song was introduced on the radio by the band’s friend Kenny Everett. The radio DJ promised not to play the song… but he did.  He aired it in October of 1975 on his popular London station, Capital FM. The listeners became obsessed and flooded the station with requests for “Bohemian Rhapsody.” Everett played it over 14 times in 2 days.

The track was released on Queen’s, A Night At The Opera, with sole credit given to Freddie Mercury. It spent 9 weeks at the top of the British charts (a first at the time). It charted back at #1 in 1991 at the time of Freddie Mercury’s untimely death.

The little song that could became the masterpiece that steam rolled the music world.

“I’m going to shatter some illusions, it was just one of those pieces I wrote for the album: just writing my batch of songs. In its early stages I almost rejected it, but then it grew. We started deciding on a single about halfway through. There were a few contenders – we were thinking of “The Prophet’s Song” at one point – but then “Bohemian Rhapsody” seemed the one. There was a time when the others wanted to chop it around a bit, but I refused. If it was going to be released, it would be in its entirety. We knew it was very risky, but we had so much confidence in that song – I did anyway. I felt, underneath it all, that if it was successful it would earn a lot of respect. People were all going, You’re joking, they’ll never play it, you’ll only hear the first few bars and then they’ll fade it out. We had numerous rows. EMI were shocked – a six-minute single? You must be joking! The same in America – oh, you just got away with it in Britain.”