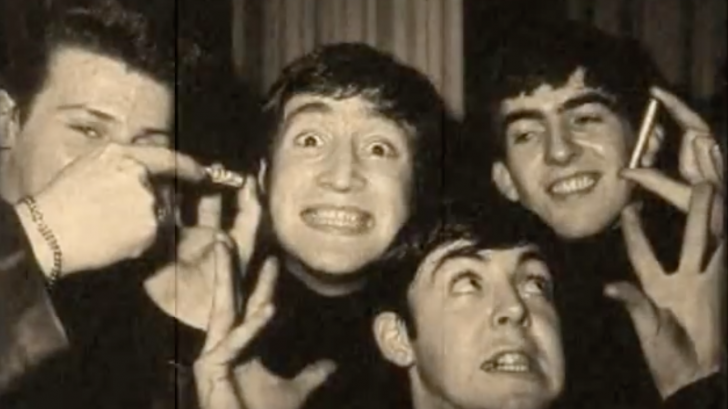 Tony Sheridan, was a British singer- songwriter and guitarist. His most notable work is tied to his early collaborations with the Beatles. Quite some time before the the Beatles were the Beatles, the band was an extension of Tony Sheridan. In the summer of 1961, the band recorded eight songs for the Bert Kaempfert Produktion in Hamburg, Germany.  For six of those songs, the Beatles were a back up band to Tony Sheridan. The two tracks in which the band played solely on their own were “Cry For A Shadow” and “Ain’t She Sweet.”

The Beatles charged the German recording company 300 marks (DEM) in 1961 which is approximate to a current $173.00 (USD). This obviously pre-dates the superfluous Beatlemania merchandise frenzy. After their payment, the Beat Brothers recorded and released “My Bonnie”- which reached #5 on the German Charts in October 1961. Their German hit proved to be a small push towards fame for the Brit rockers. Their fan-base started to grow back home in Liverpool. “My Bonnie” caught the attention of English music entrepreneur, Brian Epstein.

The Beat Brothers still had to go back to Germany to finish final recordings. On May 24, 1962 the band recorded “Sweet Georgia Brown” and “Swanee River” at Studio Rahlstedt. These recordings were lost. Then, Tony Sheridan in Beat Brothers-esque style re-recorded the songs with his vocals, a few years later when the band rose to fame. All of the recordings from Germany were later released on a 1964 album titled: The Beatles’ First.

Once The Beat Brothers were back in the UK, Epstein’s personal assistant started seeking out the band. Word got out that the group was to perform at The Cavern Club in Liverpool. Epstein and his assistant arranged plans to watch the show. Bob Wooler, resident DJ in November 1961 announced over the club’s public address system,

“We have someone rather famous in the audience today. Mr Brian Epstein, the owner of NEMS …”

The fab four were not anywhere near being the most famous people in the room yet. As customers of Epstein’s NEMS (North End Music Stores), the group instantly recognized the entrepreneur when he entered their dressing room. For the next three weeks, Epstein watched every Beatles show at the Cavern Club. Once they were the Beatles, the band signed a 5 year contract with Brian Epstein (with parental permission), and catapulted to fame.

In regards to the first time watching the Beatles Epstein had recalled:

“I was immediately struck by their music, their beat and their sense of humour on stage—and, even afterwards, when I met them, I was struck again by their personal charm. And it was there that, really, it all started”